The third time in this city, and not the last for now so far. And the reason you might ask? Well, being a great base in the middle of plenty more notorious cities and sites to visit, and a perfect international airport next door to the city centre lowering the cost of the flights to sometimes peanuts. Although it’s now long gone such Ryanair deals where we did pay 1 pence per way per person back in 2009 when we came in a group of 7 friends. Crazy times were these too; and if that’s not enough, that year our plan was in fact visiting Pisa in the morning and Florence in the afternoon, returning at night to Pisa airport for the flight back to London. It was such a summery weather that we enjoyed every moment without feeling any lazy or tired. That’s just an example of possibly a 100 more that fall into the same circumstances during that past years.

With the time all changes of course, and returning to the cities we once saw that quick for a well deserved visit was the key focus on travelling, at the same time that enjoying new places. After all, visiting Pisa will not take you too long due to its reduced size, and reaching the amazing coastal villages of Cinque Terre, Florence, Siena, or San Gimignano are just minute’s away by frequent buses and trains, and so was the aim in the trip planned in February 2016: Cinque Terre and Siena. Now 2 years after and I return to complete what I did not see yet, the masterpiece of San Gimignano, and of course another visit to Florence, thus taking the chance to also properly update the travel guides for Pisa and Florence which I wrote some many years ago and were in much needed state of make-up. But hey! back then I was still new into blogging with just a dozen of guides, while as of today it’s 410 so far for anyone to enjoy and completely free.

So now that you made it to the city, say hi to the other thousands of tourists with the same idea. It’s literally crazy any time between April and October to be here. Absolutely everyone concentrates in the Piazza dei Miracoli where the famous monuments are. You can have a little rest towards the evening when the hordes of tourists on guided tours leave, but the city is more than just this square, and you have the chance to see it for yourself if not being rushed in a tour. The moment you continue to explore around, the streets become empty, just the locals around, and so the more traditional and real restaurants and bars appear.

Looking for food was quite easy. You will find plenty of trattorias specially near the Duomo Square and the city centre. Should you plan to be in a restaurant be careful with the prices. This is a very touristy place meaning “tourist traps” are everywhere, with unnecessary inflated prices and low quality. Make sure you compare some prices around before deciding on the first you see, or as mentioned before, walk away from this area into the rest of the city. However coming towards the evening and dinner time, nothing can beat the “happy hour” places where you buy a drink, and get a food buffet included! They call it apericena. OK, do not expect having a huge choice of food, but it is great enough. For around 8 Euros for a cocktail as an example, then you can eat until you wish, although the general will be around 10 to 12 Euros. A fantastic alternative to an otherwise expensive business that can be finding a nice restaurant, and a much better way to chill out with friends or rest after a long sightseeing day.

If I can suggest great pizzerias, then it will be next door to the central train station. Both Da Filippo and Il piccolo Mondo rank among the best in town, and you can have gorgeous “cecina” which is very traditional Tuscan dish, a pizza like made of chickpea flour, olive oil and water, oven baked in gigantic stone dishes.

For more information about Pisa check Wikipedia and Wikitravel sites. The currency in Italy is the Euro (EUR). Please note that any price reference is true as from when this guide was created, therefore check prices in advance as with the time they change.

What to see and do in Pisa

-Torre Pendente – The Leaning Tower Is the Campanille, cathedral’s bell tower. With construction started in 1173, it soon started leaning due to subsidence of the ground underneath its base. The following construction eras tried to correct this by changing the weight and height of the levels constantly, but did not save it from further leaning. It was only in 2001 that a lengthy project concluded with success from the tower leaning any further plus correcting by some degrees the current lean. You can climb to the top for 18 Euros but expect lengthy queues. In the other hand, you can pre-book it online although the tickets are valid for the precise date and time selected.

-Duomo The Cathedral, in Romanesque style is another of the key sights in Pisa, characterised by the fine white and black marble, the same as the rest of the complex, and the four level portico with columns. It contains works of art by Giambologna, Della Robbia, and other major artists.

-Battistero The baptistery building is the round Romanesque dome. Construction started in 1153 although not finished until the 14th century. It is the largest of its kind in Italy. The octagonal font at the centre dates from 1246 and the pulpit created by Nicola Pisano, the father of Giovanni Pisano. You can climb to the top where to get a nice view of the area.

-Campo Santo Monumentale The last of the key buildings in the square is this monumental cemetery which includes a large collection of ancient Roman sarcophagi and medieval frescoes.

-Ospedale Nuovo di Santo Spirito The New Hospital of Holy Spirit is located right on the opposite side of the Campo Monumentale. Built in 1257 it contrast with the rest of the buildings for its red bricks against the white marble.

-Palazzo della Carovana Is the most impressive building in the square, famous for its Renaissance façade by Giorgio Vasari. After the Duomo Square, it is the next most important sight in the city.

-Palazzo dell’Orologio Translates as Clock Palace. Originally built in 1357, although the current reincarnation is a 19th century neo-Gothic appearance. It sits opposite the Palazzo della Carovana at one of the square’s corner.

-Borgo Stretto One of the principal shopping streets leading to Garibaldi.

-Ponte di Mezzo Over the River Arno, it links the main central squares in Pisa.

-Corso Italia As for Borgo Stretto from Piazza Garibaldi, this is the other main street in the city. Both streets meet at Ponte di Mezzo.

-Santo Sepolcro This Romanesque octagonal church with conical spire was designed by Diotisalvi who also built the baptistery.

-Santa Maria della Spina Built in 1230 is considered one of the best examples of Italian Gothic. One of the most picturesque buildings in Pisa. As a note, it is so small that back in 1800 it had to be moved stone by stone some meters higher to protect it from the river flooding.

Galileo Galilei Airport is very near the city centre of Pisa. It mostly serves low cost carriers, therefore making it the perfect gateway for visiting neighboring cities such as Livorno, Florence, Cinque Terre or Siena for example. It is just a 5 min train ride to the central train station, or if you prefer, a short walk of around 20 minutes. In any case, don’t hesitate in taking the inexpensive train, it only costs 1.10 Euros per way. Another option are buses. If you missed the train don’t wait for the next one as it will take longer than if taking a bus instead. The bus ride is only 15 minutes with stops at Piazza dei Miracoli (where the main attractions are) and the central station. Get on the first available transport upon exiting the airport.

Coming by train or bus is also very easy from neighboring cities like Florence, Lucca, Siena, Genoa or farther as Milan or Rome with frequent, reliable and cheap trains. Make sure you are in a regional train for the cheapest fare as otherwise the fast trains are exponentially high in price, although this will depend on the time you can spare for travelling. A regional train can take hours while a high-speed will take you there in no time.

Within the city there is no need to take any public transportation, which in any case is formed of buses and trolleybuses. The city is small and easy to walk everywhere and to all the tourist sights. Most of the historical centre, noticeable around the Duomo and Pisa Tower is pedestrianised.

Although being such a small city but with the enormous affluence of tourists, the choice and availability of hotels is in fact large, with quite competitive prices (of course during low season). Bear in mind that Pisa is generally just a stop of few hours for the majority of tourists visiting the city. They will either be passing by on way to Florence, Siena or Rome, of to the north of Italy heading towards Genoa or Milan. On both of my past visits in 2001 and 2009, Pisa was just a stopover in the way and therefore I cannot recommend any specific hotel back then. As usual, a good point to start your search is by checking some of our preferred affiliate hotel search engine such as Hotels.com, Booking.com, Expedia, Otel.com, Agoda, Opodo, LateRooms or Ebookers.

From my recent experience in March 2018, I stayed at the Touring Pisa Hotel, that’s just meters away from the Central Train Station hence great location to my needs. Walking distance to the airport (that’s a fabulous fact about this city anyway), and the train station in 2 minutes. I knew I would be commuting quite a lot by train so I needed somewhere in this area. It turned out to be a nice modest 3* hotel with anything I needed, and although a bit dated rooms, everything was in great working order and clean. The best of the stay, the people there. And from the hundreds of other reviews I read online about this property, I am not the only one giving such a positive words in the staff. So friendly and helpful!. The breakfast was modest, however good enough to start the day. A great value for money.

Back in 2016, although we came to Pisa as our base for reaching Cinque Terre, the choice of hotels was way larger than back in 2009, with plenty of great deals. I understand this was due to be pure low-season and I can imagine this same trip during high-season as a seriously expensive business. We stayed at the Rosso di Sera Relais Tuscany, in the north of the city meters away from the worldwide known attraction of the Pisa Tower, and also conveniently near the Pisa San Rossore train station where you can get on a train to Cinque Terre. This is a small boutique property with all the facilities needed for a short stay plus more, like a really nice jacuzzi, and excellent breakfast. Staff was very polite and professional, the room was large and nice, very clean and neat in design, and overall very well cared property all over. Without doubt a great choice to repeat in the future. 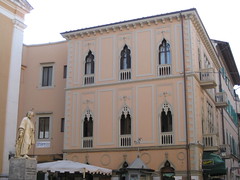 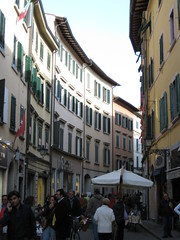 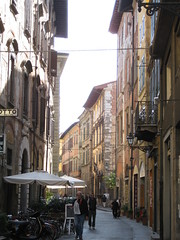 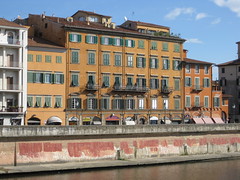 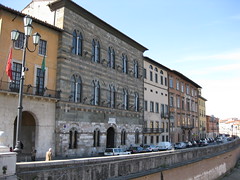 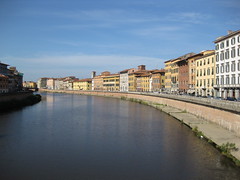 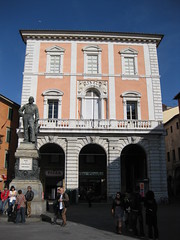 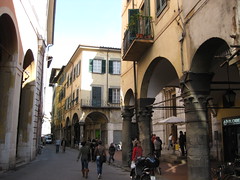 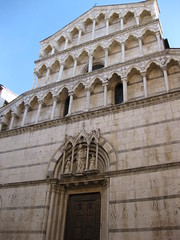 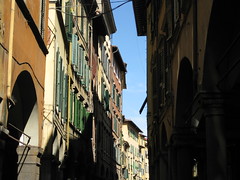 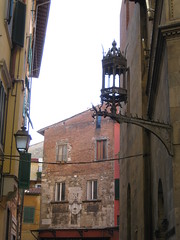 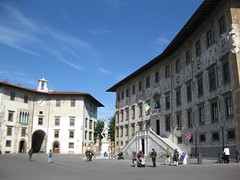 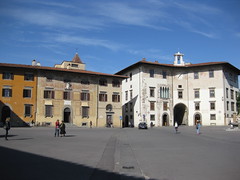 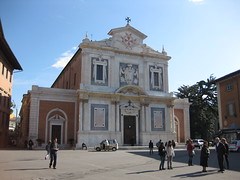 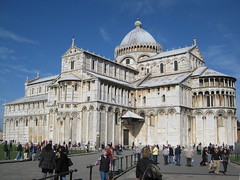 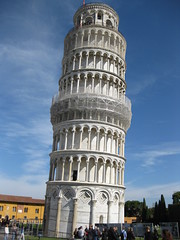 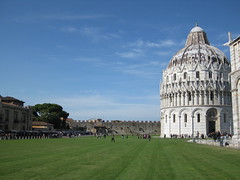 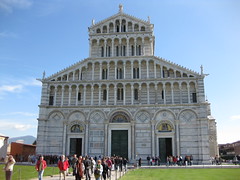 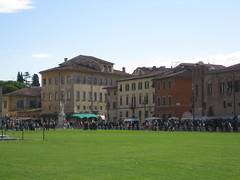 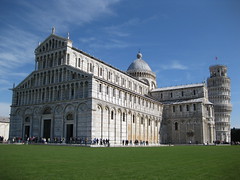 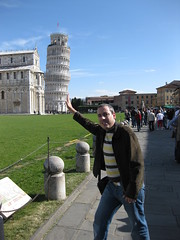 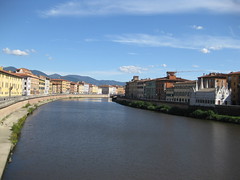 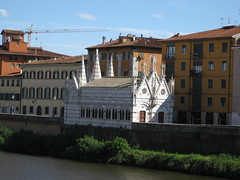