The most Spanish city in Argentina

The second part of this trip through Argentina and Uruguay was in fact just a day trip, colonial Salta. Similar to the ones we’re used to do anywhere across Europe, but in this occasion it was planned well after the original flights and route was booked. It was then that we checked and found out that many days for visiting the capital city Buenos Aires was going to be too much. Not only we were there upon arrival, but also before the departure at the end of the trip. With Montevideo the next in line already booked the following days, it was right to select one of the oldest and best preserved colonial cities in the country. Unfortunately on this occasion one of my all time dreams could not be done due to the lack of time of course, taking the Train to the Clouds through the Andes. That’s good enough to stay there for another time, including Atacama at the other side already in Chile’s soil.

Located at the northwest, equidistant to both Chile and Bolivia’s border, sits at the foothills of the Andes on what was the southernmost region of the Inca Empire, hence some discoveries such as the frozen Llullaillaco Children, the best preserved mummies in the planet which you can visit at the MAAM Museum in downtown Salta. While the city and everything east of the Andes are green valleys, forests, rivers, lush vegetation; all that goes to the west, merely few minutes’ drive from downtown turns desert, the mighty Atacama Desert.

Due to its well preserved architecture covering all eras from its colonial origins after its foundation in 1582 by the Spanish conquistador Hernando de Lerma, to the fine 18th, 19th and 20th century buildings in baroque, neoclassical, modernist, eclectic and art-deco style; it has gained the title for being the”most Spanish” city in Argentina, more in detail, very closely to an Andalusian town. As for the urbanism this is another perfect example of the traditional Spanish orthogonal grid of streets and avenues with a series of squares and gardens, and as usual, the heart of the colony would be the main square where to find the City Hall and Cathedral. Here in Salta this is the Plaza 9 de Julio.

Sightseeing the city is a matter of a day, no more, however people coming here do usually spend 2 or 3 days and that’s for a reason: the Train to the Clouds. One of the greatest, most beautiful and fascinating railways journeys in the world. This has become so popular that a booking before even coming to Salta can be your only chance to manage some tickets, and we are talking of an already expensive day tour at over 120 USD per person excluding meals. It is nevertheless unique, the landscapes you will enjoy and the spectacular bridges and viaducts with La Polvorilla taking everyone’s attention whether inside the train or a train-spotter not in the tour. It’s over 4000 meters high, hence why this train’s name; so high that they will serve you with coca tea aiming to alleviate the height sickness. Departing at 7.00am, returning around 23.00pm this is a very long and tiring day therefore that the average tourist rest the following day before continuing their trips perhaps west across the Andes into the Atacama Desert and Chile, maybe north into Bolivia and Paraguay, or south elsewhere in Argentina.

After all, Salta is a perfect base not just for visiting great places and heritage of Argentina, but the neighbouring countries one can travel overland with some of the most spectacular views of the Andes. Head west and you enter one of the most arid desserts in the world, also some of the highest regions above sea level, the Atacama Desert as you enter Chile. Head north and you reach fertile valleys and incredible mountains on your way to Bolivia and Paraguay, noteworthy Humahuaca and the stunning Serranía de Hornocal, listed by the UNESCO as a World Heritage Site. The beauty and uniqueness of that place is difficult to match elsewhere, these are the mountain range with that limestone formation exposing the multiple colours, the “hill of the 14 colons”.

Lastly with some few notes with regards to the cuisine, this is like everywhere you are in Argentina, one of the best treats and enjoyments in the trip. And especially here where you can find almost everywhere very traditional home made dishes also at a fraction of the cost than in the capital and the Patagonia region. A proper Asado (variety of mixed grilled meats) with some delicious chimichurri sauce is one of your best bets. The meats from the region are of outstanding quality! Stews are also popular considering how near the Andes and highlands are, hence the very cold temperatures at merely few minutes’ drive from the city centre where it is all-year round warm to hot.

Empanadas in the other hand, are to die for, and so is the pasta and pizza, legacy of the Italian immigrants. While a bit different in Salta than other regions of Argentina, is the influence of some Arabian ingredients. This is the legacy from the Syrians and Lebanese immigrants that came towards the beginning of the 20th century that helped recover Salta from its long time forgotten times and boosted its economy once again.

To recommend a great restaurant, beautiful inside and out and excellent quality, large portions and incredible good value for money, Dona Salta has it all. Located opposite the Saint Francis Church and Convent.

For more information about Salta visit Wikipedia and Wikitravel sites. Argentina’s currency is the Peso ($, ARS). Please note that any price reference is true as from when this guide was created, therefore check prices in advance as with the time they change.

What to see and do in Salta

-Cathedral and Archbishop’s Palace Along the north side. Completed in 1882 as the reconstruction of the previous that was destroyed in an earthquake, designed in colonial Spanish neo-baroque style.

-Contemporary Art Museum At the northeast corner of the square, in a restored 20th century building.

-Provincial Theatre Next to the museum along the east side.

-Hotel Salta By the southeasternmost corner of the square. A great example of neo-colonial style.

-Cabildo The old Town Hall, nowadays the Museum of History of the North. It is the oldest still standing building in the city of Salta, dating from 1780 after it was built atop the older and smaller version that stood since 1626; and the most complete Cabildo in Argentina. If you are lucky, you can enjoy the changing of the guards happening at the front, with traditional gauchos. The dates vary depending on month and season.

-MAAM Museum The Museum of High Mountain Archaeology exhibits the archaeological finds and discoveries through the Andes mountains of the region. The centerpiece are the Llullaillaco Children, 3 Inca child mummies found frozen at the summit of the Llullaillaco Mountain, 6740 meters high in 1999. 40 ARS to enter, 10 for students and senior citizens. You find it along the west side of the square.

-Saint Francis Church and Convent Just a block east on Caseros after the main square. With origins in 1625 when the first building was erected, the current was built in the 18th century under the surveillance of Fray Vicente Muñoz from Seville, Spain, who did also designed the Church of Saint Francis in Buenos Aires and the roofing cupolas of Cordoba‘s Cathedral. The bell tower was added in 1877, becoming the tallest in South America. It is without doubt the most emblematic of all churches in the city, even the Cathedral. You can get to the top for 180 Pesos, just tell the ticket officers you only would like to access the tower; otherwise you will be bond to access the site on a guided tour although they will show you much more and explain everything.

-San Miguel Market Along Florida Street, the main market of the city occupying an entire block.

-Church of Our Lady of the Candelaria de la Viña Along Alberdi Street, 5 blocks south of the main square. It is another of the major landmarks of Salta, completed in 1886 in Italian-Baroque style, beautifully painted blue and white. Its tower is the second tallest of any church in South America.

Martín Miguel de Güemes International Airport, located some 7 kilometres southwest of the city is the main arrival point for tourists, not to mention the most convenient considering how big distances can be in Argentina. Of course one can get on a transnational bus, but it’s approximately 20 hours to Buenos Aires, 13 to Cordoba, 18 to Mendoza and plenty others in between, greatly longer of needing to change buses if one consider heading south towards El Calafate and Ushuaia in which case a border crossing into Chile is necessary before re-entering Argentina.  International routes link Salta with neighbouring Chile, Bolivia and Paraguay.

From the airport, the bus 8A runs along the main road, parallel to the terminal, but some 400 meters ahead along Acceso Aeropuerto road at the roundabout. These costs 20 ARS, however you can only ride it if you have a SAETA prepaid card which can be bought at the newsletter shop in the terminal. These costs 150 ARS and comes with 75 in credit. With one card, multiple people can ride but you will need to top up enough credit. Be cautious with this, because most kiosks all over the city do not top it up, others claim their machine broke down and cannot do it, and there is only a single dedicated kiosks to do this in the entire city, hence it will be wise to do the top up as you buy the card. simply calculate the trips you need.

Once you reach the city centre, distances are quite small, and the historic colonial core can be visited easily on foot. After all, it’s a matter of few hours to completely enjoy all the sights, hence definitely no need for taking any public bus to move around.

As we came here to spend the day our from our base at Buenos Aires, we cannot say much not recommend a place to stay. In the other hand, this is the less of a problem. Salta is a major tourist spot, and pretty much known worldwide as explained earlier because of its Train to the Clouds and landscapes, therefore all relates to hotels, hostels or rental apartments gets a good point. A reasonable point to start your search is by checking some of our preferred affiliate hotel search engine such as Hotels.com, Booking.com, Expedia, Otel.com, Agoda, Opodo or Ebookers. 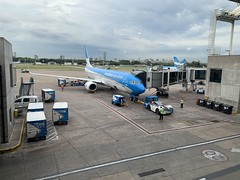 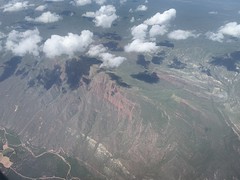 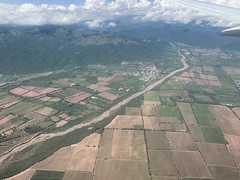 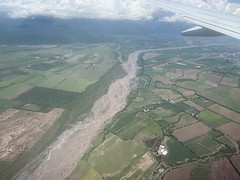 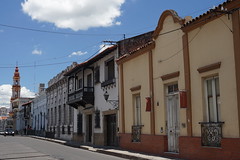 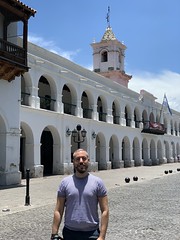 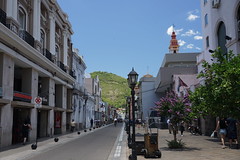 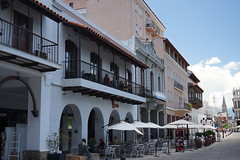 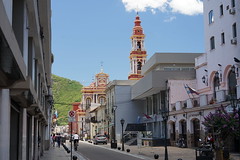 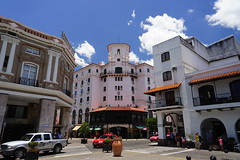 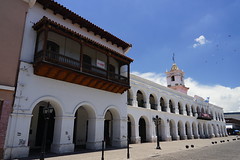 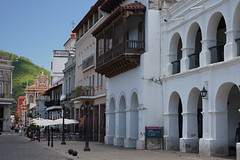 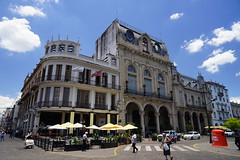 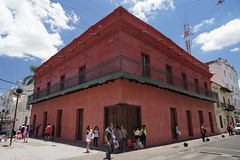 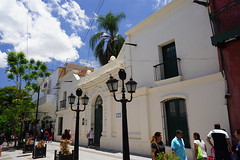 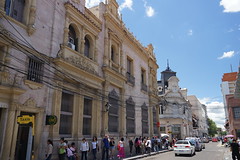 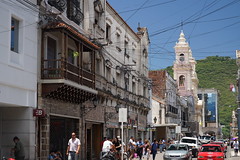 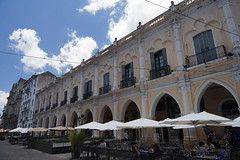 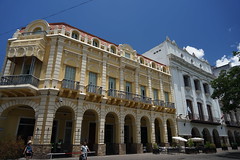 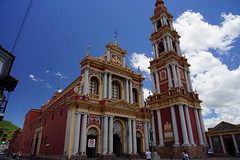 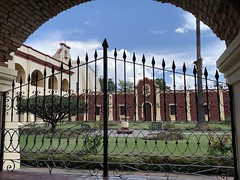 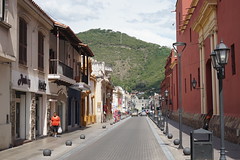 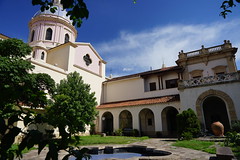 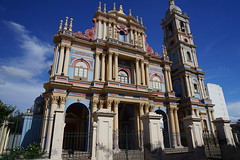 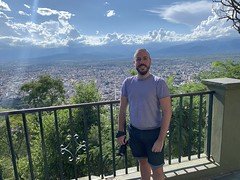 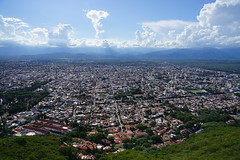 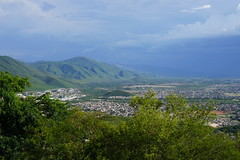 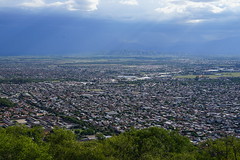