Another of the jewels amazing Jordan has to offer, the ancient city of Gerasa, nowadays Jerash. one of the best preserved Roman city from the Decapolis group, the once 10 cities on the Eastern Frontier of the Roman Empire in Judea and Syria. The most complete and best preserved city of the Roman Empire, outside of Italy, often referred as Pompeii of the East. Nestled in a green and well-watered valley in the biblical land of Gilead, the remains of the ancient city have long attracted tourists from all around the world.

Wander among the original temples, theatres, plazas, paths and colonnaded streets; all enclosed within the remaining city walls. A history that goes beyond the Romans at a place inhabited with settlements dating from the Bronze Age, the Iron Age, the Hellenistic, Roman, Byzantine, Umayyad and Abbasid periods, indicating human occupation at this location for more than 2,500 years.

It lies merely 50 kilometres north of Amman, hence the perfect half day trip from there. It is so the case that when we arrived to Jordan, we actually did not know about this place until we saw postcards at all other sites we’ve been about the incredible and rare-oval shaped forum. It really got out attention for its uniqueness, and in truth, it is the only one the Romans ever built this way. Coming here therefore was not even optional, it became a must somehow squeezed in our very tight agenda.

Unfortunately, the time was totally against us, and we did underestimate the overall journey time and the large size of the site for what we had to rush it like we’ve never done it before. Our flight back to London was merely few hours later that day. Nevertheless, we managed to get a glimpse and some stunning photos, but could not visit it full. That crawls for another reason why to return to Jordan, on top of the many other great places this fascinating county holds.

For more information about the city check Wikipedia or Wikitravel sites. Jordan’s currency is the Jordanian Dinar (JD). Please note that any price reference is true as from when this guide was created, therefore check prices in advance as with the time they change.

How to get there from Amman

Arriving here from Amman is very easy. All you need to do is making you way into Tabarbour bus station, located in Urdun Street near the Tareq area. From here frequent buses leave for Jerash for only around 1JD. Calculate for the journey around 1 hour, although it’s less. If you start your day early enough, and have plenty of time, then you can take the bus to Ajloun instead, and see the castle first, then take another bus from Ajloun to Jerash, and you will be still have plenty of time to spend at Jerash.

How to visit the site

Once you arrive to the site, the first you will encounter is the Hippodrome, amazingly preserved, the walls and the great Arch of Hadrian, all of which accessible to anyone without any ticket. Then you come to the ticket office to enter the city itself.

The most impressive sight within is the unique oval-shaped forum. This is truly rare, since every Roman city was built on a perfect grid of perpendicular streets, meeting at the very hear of what is known, the Forum, also square or rectangular, but never oval. From the Forum, the Cardo Maximus keeps most if it’s colonnade at both sides of the street, making both an impressive sight.

Elsewhere around the city you will find the thermae, houses and palaces with mosaic floors, monuments, fountains; the North and South Theatres and the South Gate which leads outside the complex at the other end. The enormous nymphaeum built in 191 AD is one of the finest of the Roman Empire, and the Temple of Artemis as one of the best preserved in Jerash.

As this was a day trip from our base in Amman, there’s not much I can say about a recommended place to stay. Jerash is a small city built side by side the ancient site, and does have some hotels but very limited choice. A good and reasonable point to start your search is by checking some of our preferred affiliate hotel search engine such as Hotels.com, Booking.com, Expedia, Otel.com, Agoda, Opodo or Ebookers. 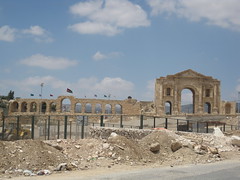 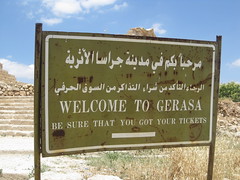 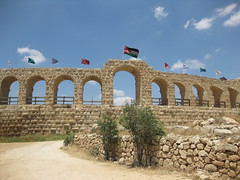 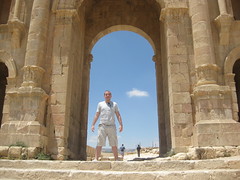 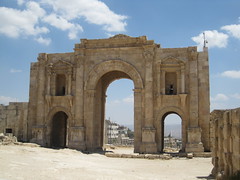 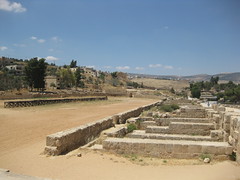 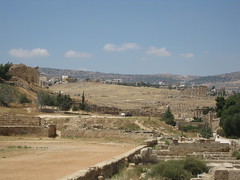 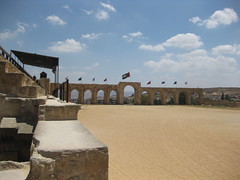 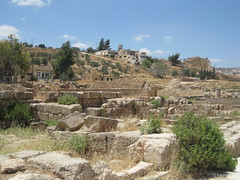 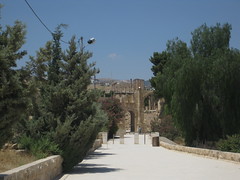 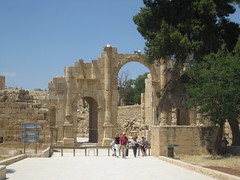 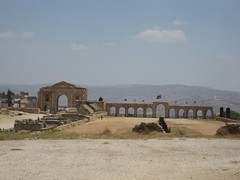 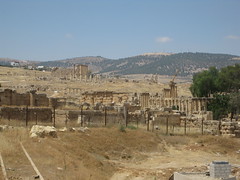 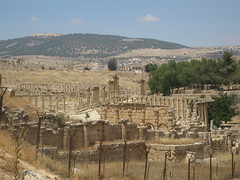 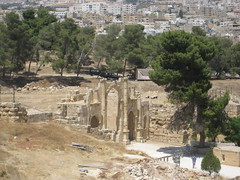 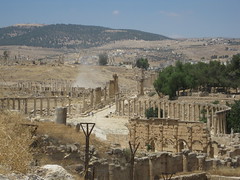 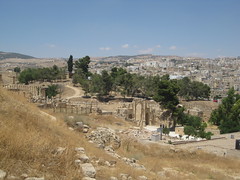 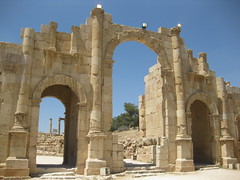 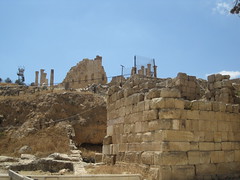 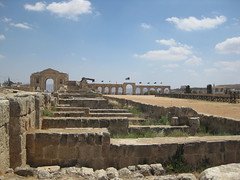 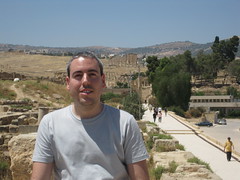 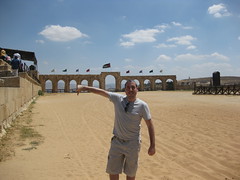