One of the four Maya capitals

At one of the highlights on this Central America trip without any doubt! The ancient Maya city of Copan in Honduras, which in fact was one of the four capitals of this ancient civilization, in this case the eastern capital. The others were Tikal to the north (in Guatemala), Palenque and Calakmul to the west (in Mexico). Having been already in Tikal before, now in Copan, the remaining 2 as of today are on the scope to be the next candidates, hopefully soon. The four capitals were also some of the largest Maya cities and as such, the incredible amount of structures to see is large, yet bearing in mind only a small portion is excavated on them. Did I also mentioned Honduras counts as of today as a new country that I have not been before? This means country visited number 74!.

While if Tikal was an easy trip from Flores in Guatemala, the nearest larger city, and the visit itself, even through right in the middle of the jungle, was quite easy to navigate; in the case of Copan this was way much more laid back, and reaching this place from Guatemala City was a lengthily but comfortable bus ride. Go and back in the same day. Exhausting and tiring but well worth it if you ask me.

Both Copan and the northern capital, Tikal, have a lot to share in common. While if architecture, structures and construction across the Maya civilization do not vary much (unless for the the northern region of Yucatan with the clear Puuc style), the location of the cities vary. In this case, both were created in the middle of the jungle hence why they were “lost” for so many centuries, buried deep beneath the overgrown nature. It is up to date that excavations are still ongoing, and you can guess the many small buried pyramids and other structures under the massive roots of the trees and vegetation. Only a small portion of the city has been uncovered.

From the 5th to the 9th centuries AD the city boomed and flourish, following a lengthily decline through the centuries, the population declined from an estimate of around 20000 people that once lived within the city and nearby to merely few farmers left at the time of the Spanish arrival in the 16th century. This is in any case, not an isolated case since the entire of the Maya civilization suffered the same decline until their existence ended with the Spanish.

The site is truly worth the visit, and even knowing how many hours you might spend on a bus to reach it and how little time on the actual place you will have left, I would have deeply regret if I would not have come here. The beginning of our Central America was planned around this trip and I would have never changed it.

For more information about Copan check Wikipedia and Wikitravel sites. The currency of Honduras is the Lempira. Please note that any price reference is true as from when this guide was created, therefore check prices in advance as with the time they change.

As we came here from Guatemala City, I can only describe this way. From Honduras you can come here without troubles as there are plenty of buses from many destinations, and day tours from the capital, Tegucigalpa, or the second largest city, San Pedro Sula for example. However, with Honduras you need to know that the overall security and safety is a real problem. It ranks as one of the unsafest countries in the world, and San Pedro Sula as the most dangerous city in the planet! Then coming from the neighboring country sounded just about the best decision. The good side of the story is that Guatemala is right next door and way much more developed than Honduras. Copan sits merely 10 kilometres from the Guatemalan border along the Panamerican Highway, therefore as you can imagine, you can easily book a day tour from the many tour operators within Antigua and Guatemala City.

We decided to do this tour on our own, getting by ourselves the transportation needed to reach the place. As you can imagine, the cost saving was incredibly a lot. For that, the bus company Headman Alas was the best choice with the best bus times. There is no much more choice other than 1 or 2 more bus companies anyway. They have at least one departure per way per day, other days twice daily. The best time you should aim for is the 5.00 am departure from Guatemala City arriving at Copan Ruinas at around 10.00 am. Their only returning bus from Copan Ruinas is at 14.20 pm arriving back in Guatemala City at 19.20 pm. You can easily book the tickets on their homepage, with a cost of almost £50 per person for a return (paid in Quetzals since your departure starts in Guatemala).

The bus will drop you off in the south eastern corner of Copan Ruinas city, 5 minutes walk from the main square. From there is is little over 1.5 kilometres to the entrance of the archaeological park. You can either walk or get a short taxi or rickshaw drive there.

*Please note that the bus times on both directions might vary depending on the border crossing. For instance, we decided to leave the bus at the Honduran border as it was taking ages for everyone to pass through. Instead, just meters ahead from the border there are micro buses taking you to the centre of Copan Ruinas for very little money. This way we saved at least 30 minutes if no more.

The general admission fee to the archaeological park with the burial grounds is $15.00. An extra $15 needs to be paid if you would like to access the Tunnels of Rosalila than run under one of the pyramids. Although this is nothing out of the blue, it is interesting as it is one of the very few places where you get to see how a pyramid was built right on top of another older one. The site opens daily from 08.00 am until 16.00 pm.

How to visit the site

The archaeological complex is clearly signposted with a trail along the way. Try to stick to the paths since you are in the middle of the jungle and can be dangerous if you go the more hidden areas because of possible snakes, spiders and creepy crawlers in general.

Check the map at the entrance gate, or have one printed with you (I easily found a nice one over the internet). This way you can locate yourself at any time, but don’t be afraid, it is hard to get lost. This is not a large site as Tikal is, with so many paths everywhere and very easy to lose track and get lost. Here, everything is more compact with only a “small” portion of the entire site uncovered. The most important constructions you will have to remember are the remarkable stelaes and altars around the main Plaza, the main pyramids, the ball court and the awe-impressive Hieroglyphic Stairway by the main Plaza and considered the longest inscribed text in the Maya civilization.

As an extra (also at extra cost), are the Tunnels of Rosalila. If you are lucky enough to be one of the few people allowed per day, then you can wonder under one of the pyramids through the tunnels in between the current construction and the older smaller structures inside the larger you see today from the outside.

Farther from the core of the city (just 1 kilometer anyway) are the burial grounds of the elite people. This is also included in your general admission ticket to Copan, but often overlooked by tourists. Nevertheless, should you still have some time before heading back, it is worth to get there and admire the high level of carving elaboration. 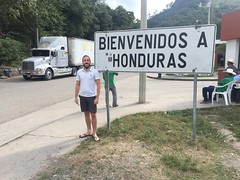 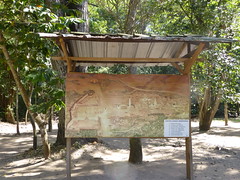 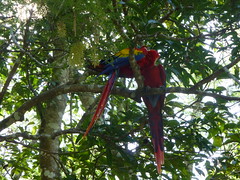 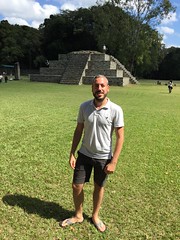 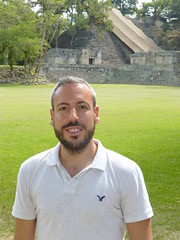 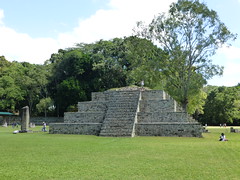 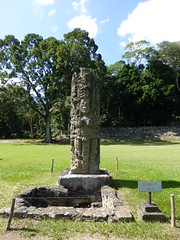 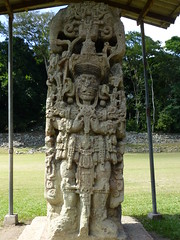 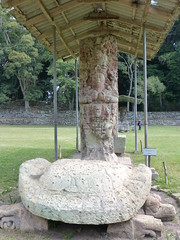 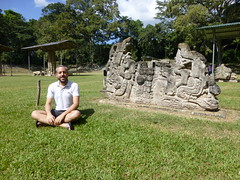 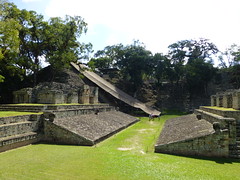 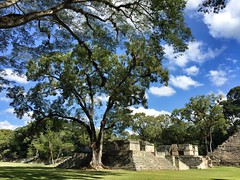 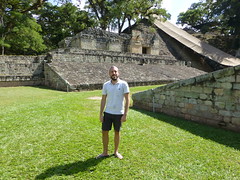 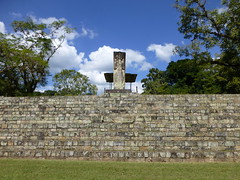 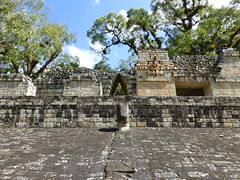 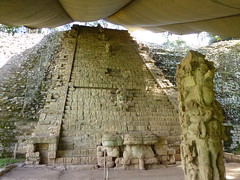 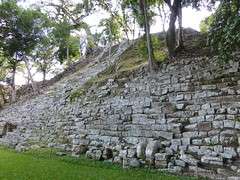 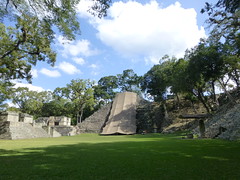 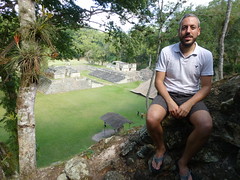 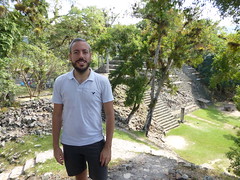 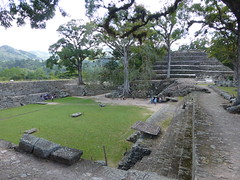 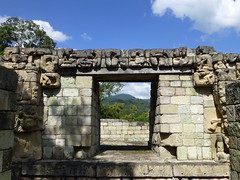 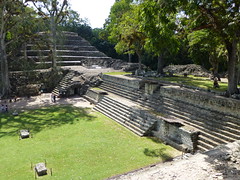 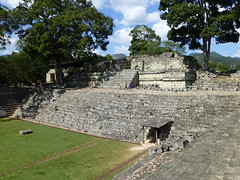 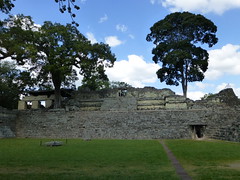 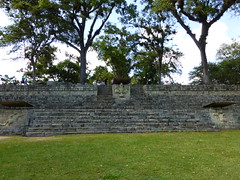 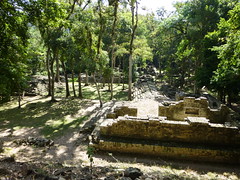 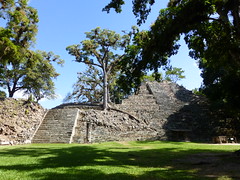 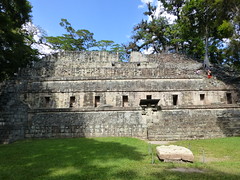